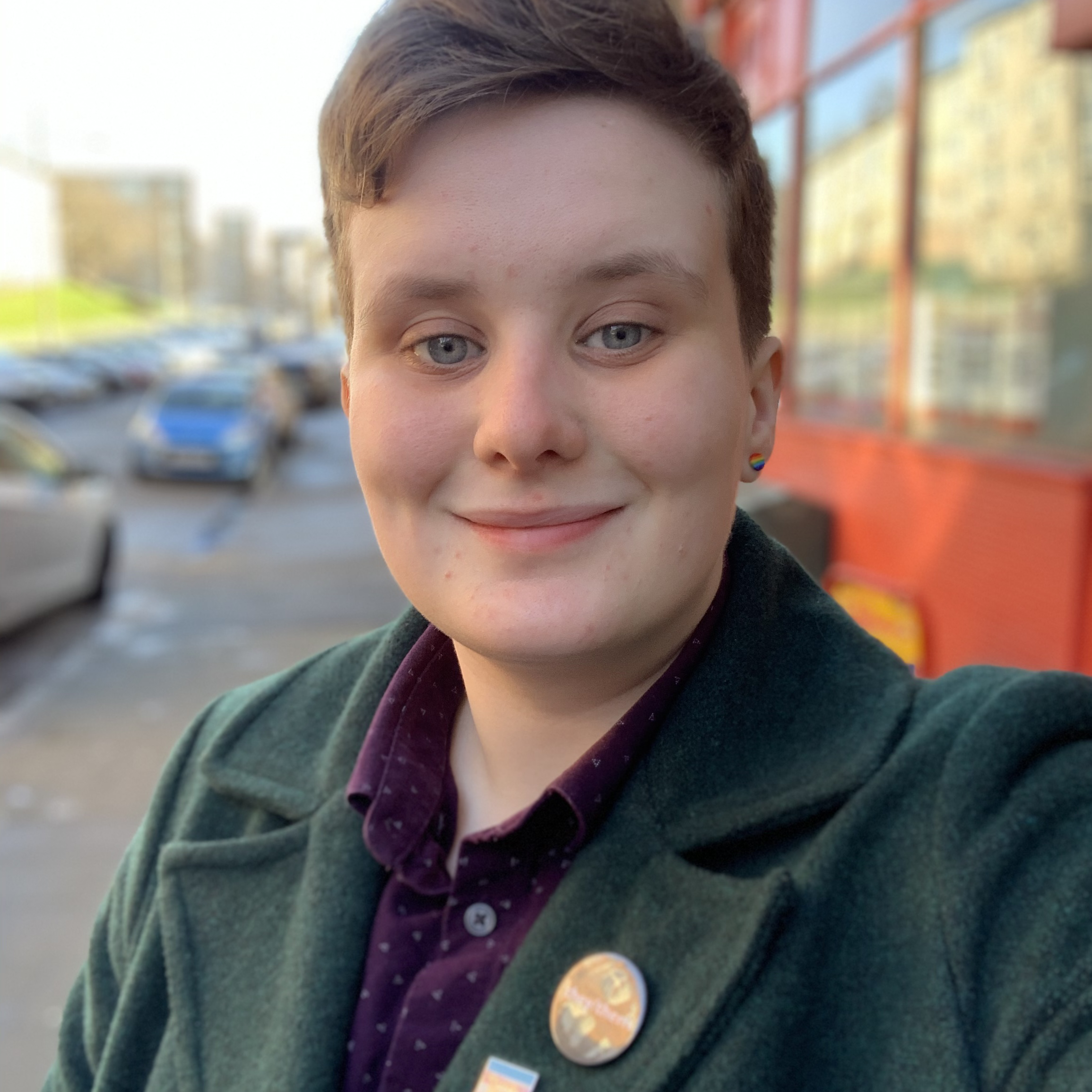 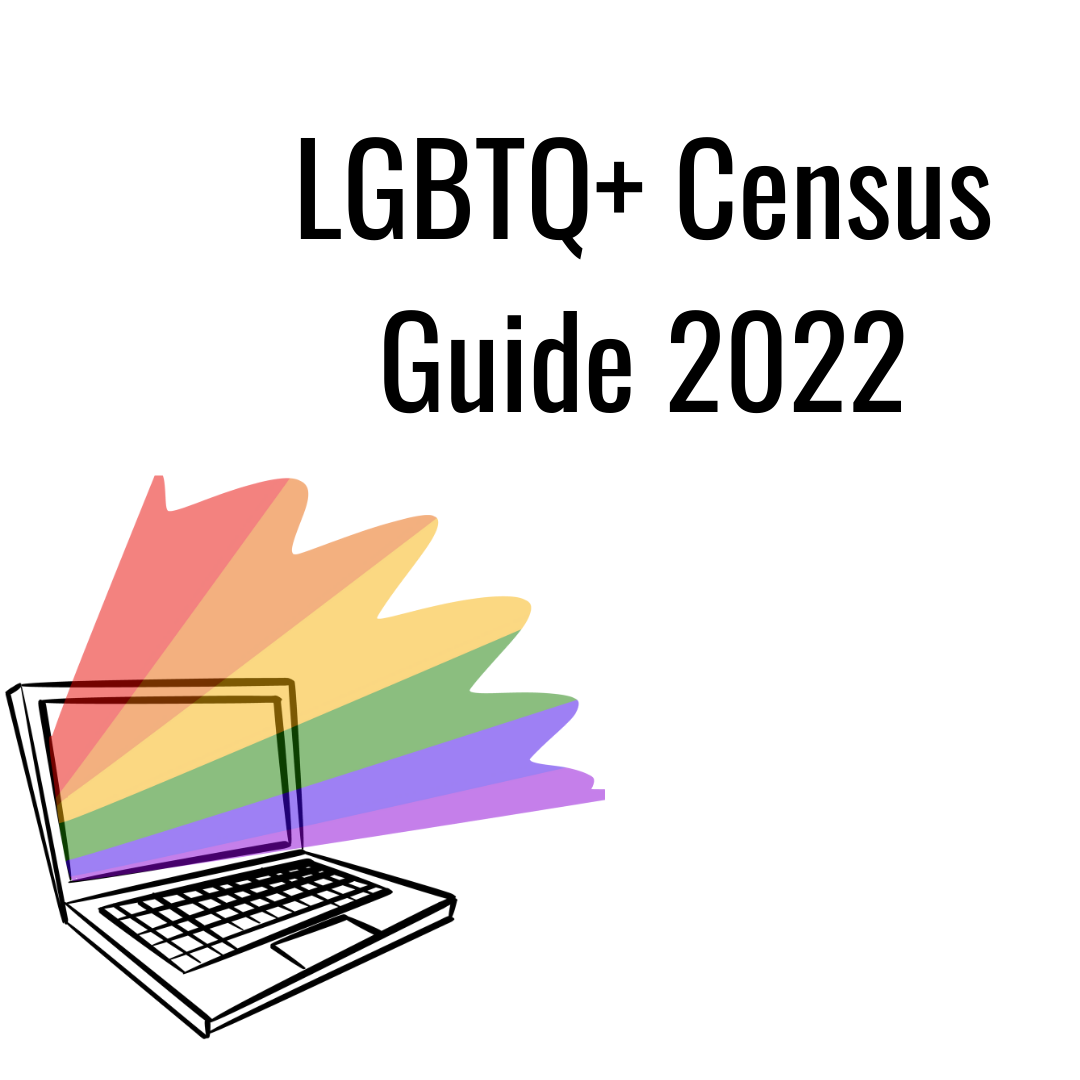 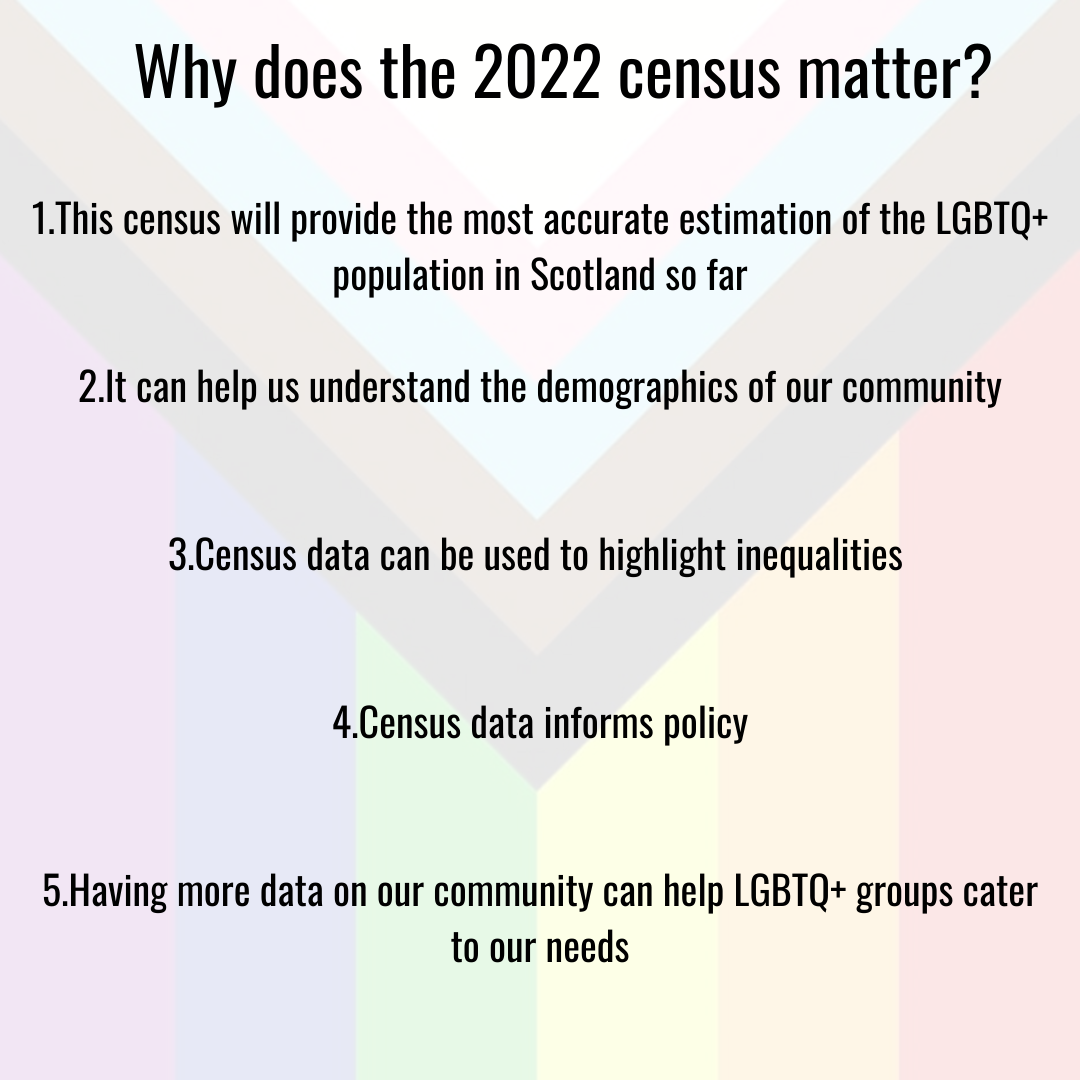 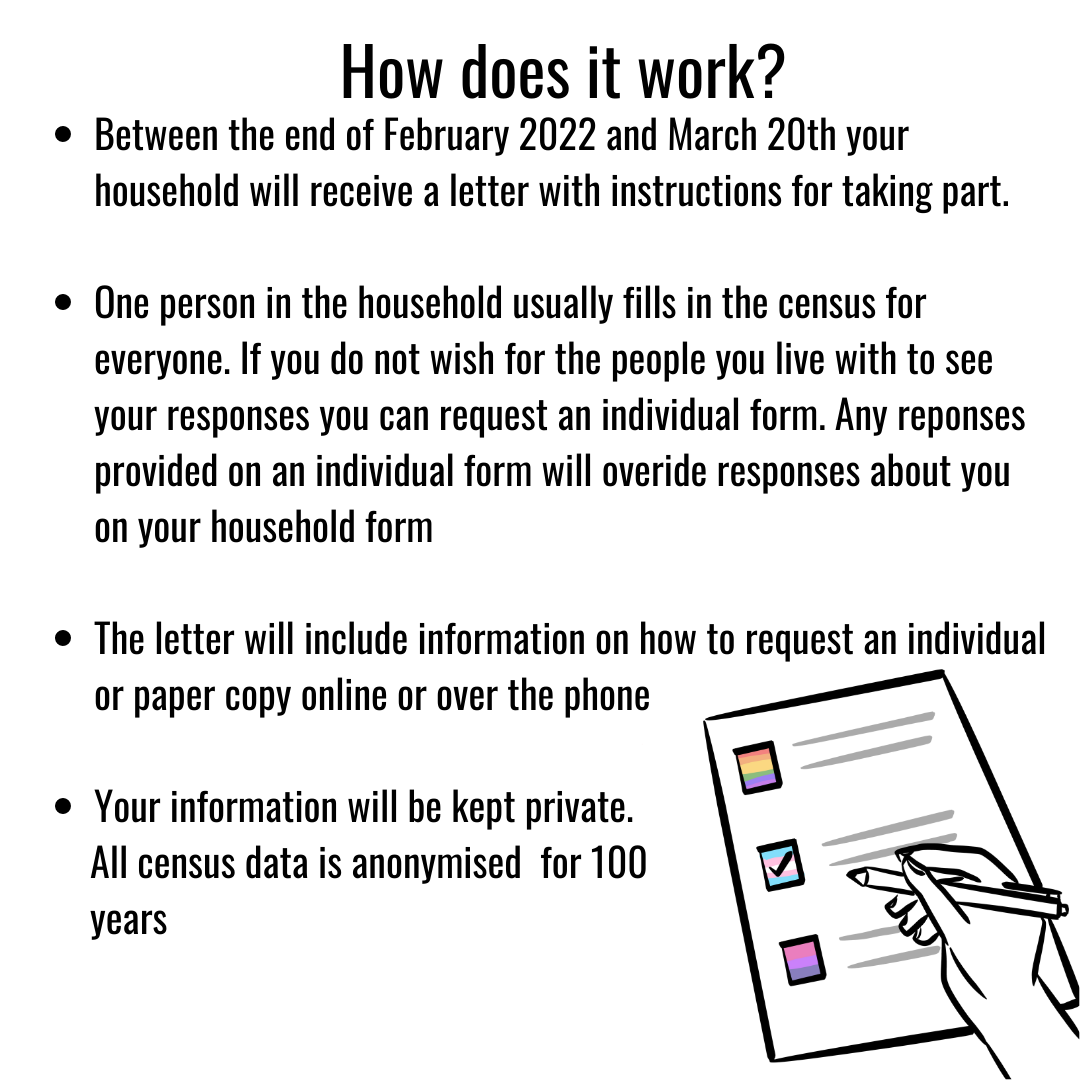 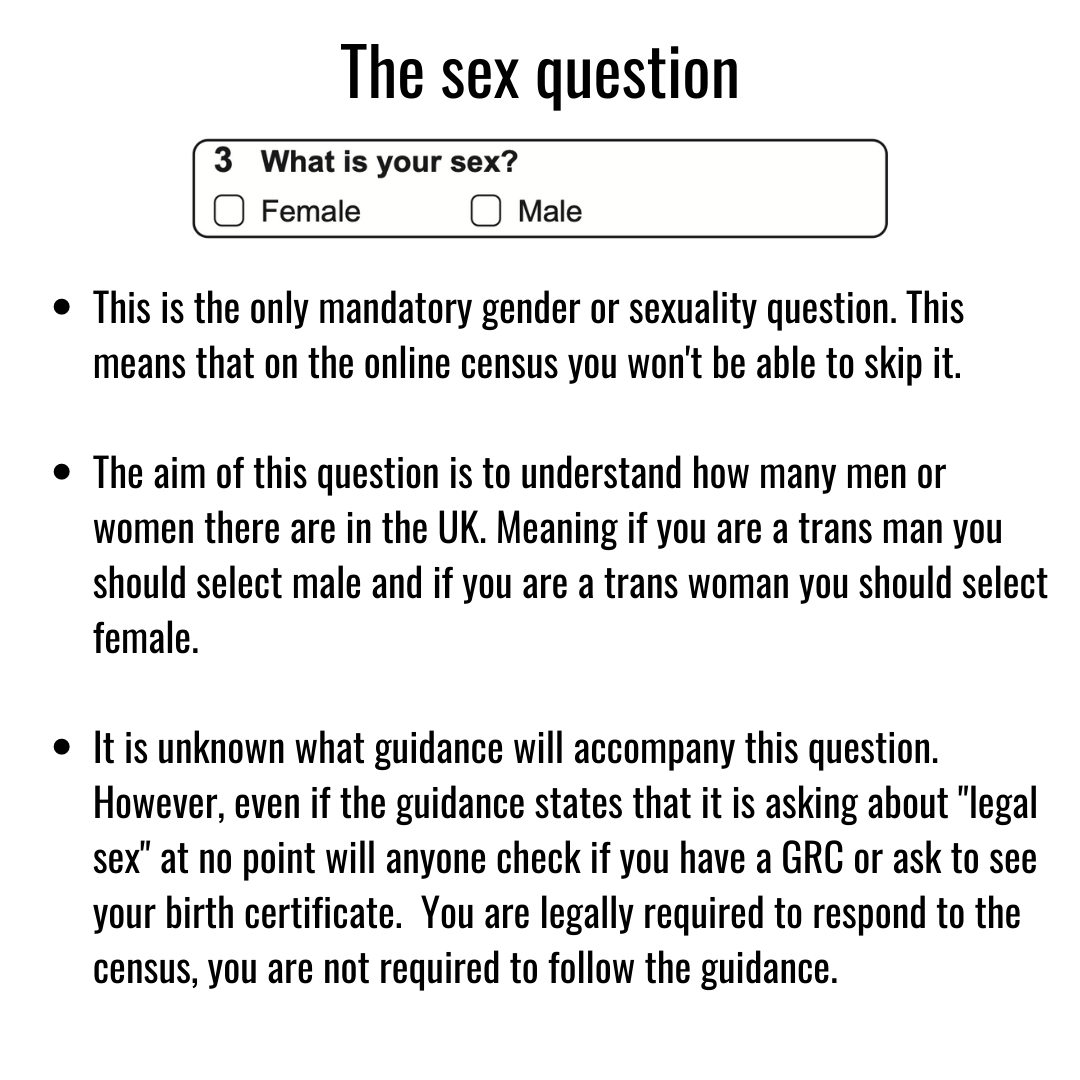 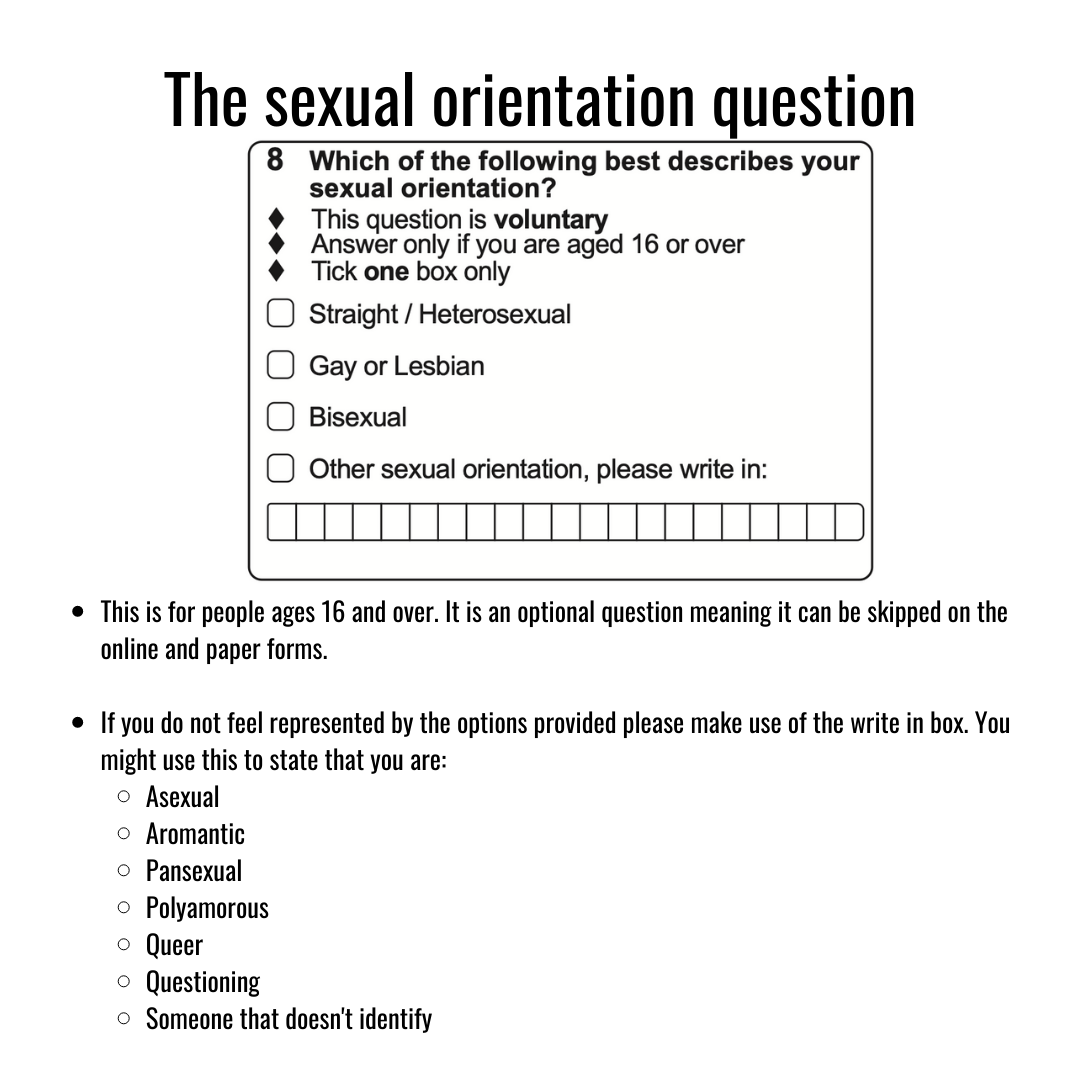 The legal case over the census

On the 2nd of February the Court of Sessions in Edinburgh heard the case seeking to change the sex question guidance in the 2022 Scottish census. The current guidance, much like the guidance in the 2011 UK censuses, is “lived sex” guidance meaning it recommends people respond based on how they live. Therefor trans men select male and trans women select female. The case wishes to change to “legal” or “documented sex” guidance which would state that you respond based on your birth certificate. If following this guidance, only trans people with GRCs would respond based on how they are born while other comparable trans people misgender themselves.

The case was brought forward by Fair Play for Women, who previously brought a similar case against ONS over the guidance in the other UK censuses. Although, Fair Play for Women were granted permission to carry out a judicial review over the other UK censuses, the guidance was changed before any such action occurred. We do not currently know the verdict surrounding the Scottish census.

In a previous blog post I discussed the significance (or lack thereof) of the guidance changing in the census in England, Wales and Northern Ireland. The key points to note are as follows:

In previous blog posts I’ve mentioned that changing the guidance sets a worrying president. It undermines trans peoples’ ability to know themselves best and reinforces regressive binary understandings of sex. Fair Play for Women’s focus on sex question guidance is an attempt at what Collier & Cowan(2021) describe as concept capture. It is hoped that by embedding an regressive binary notion of sex based on the outdated gender recognition system in the census that this could have wider political and legal implications for the understanding of sex, which would greatly harm trans people. This is the primary reason it should be resisted. The impact the guidance has on the census itself is minimal. To make meaningful change to the way we count sex and gender we need to move away from binary sex questions, which exclude everyone outwith the binary and clearly create confusion.

Collier, B. & Cowan, S (2021) Queer Conflicts, Concept Capture and Category Co-Option: The Importance of Context in the State Collection and Recording of Sex / Gender Data. 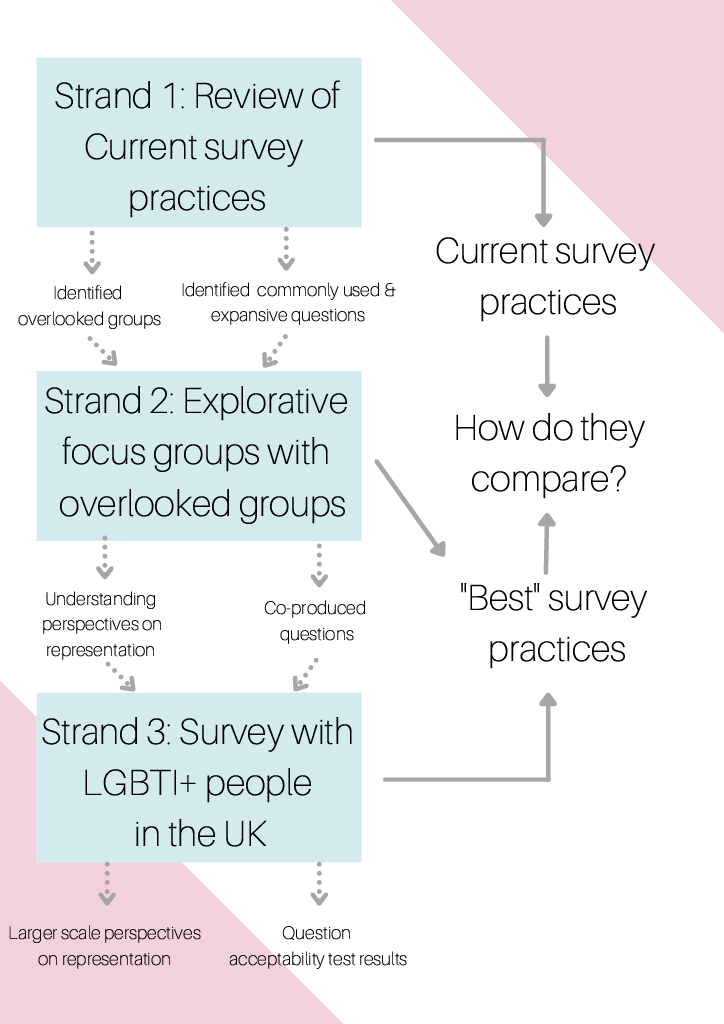 The third and final strand of my research has begun and I need your help. My research aims to find out how differences of sex, gender and sexuality should be represented in UK population surveys. For the final strand of my research, I am surveying people ages 16 and over who live in the UK and are part of the LGBTI+ community. The survey asks for your perspectives on what information about your sex, gender or sexuality should be recorded. It features questions designed by people whose relationship to sex, gender or sexuality is usually overlooked by UK censuses. You will have the opportunity to share your perspectives on these questions and help identify if they would be good alternatives to current survey practices.

The above diagram depicts my research process. The survey is part of Strand 3. In Strand 2 I engaged with 4 different overlooked groups that were identified by reviewing current survey practices they were:

In Strand 3’s survey I want to continue to engage with these groups while also talking to the wider LGBTI+ community. This is due to the fact that although lesbian, gay and bisexual people are occasionally represented in population surveys if there is no sexuality question, they are not the assumed norm unlike straight people. The purpose of the survey is to see if the perspectives shared by the Strand 2 focus group participants are held by a larger group. It also gives the opportunity to test the “ideal” questions designed by the focus group participants.

The survey will be used to construct an idea of best survey practise for representing differences of sex, gender and sexuality in the UK. I will then compare that to what is currently done to produce recommendations on how to improve upon our current approaches to asking about sex, gender and sexuality. The overall objective of this research is to further respectful representation of marginalised groups in an attempt to produce data that will help us understand our communities and meet our needs.